Suddenly, I find myself smack dab in the middle of another summer doing field research on the island of Moorea in French Polynesia. I have been fortunate enough to have this place become a home away from home for me for the past four years, yet it still never ceases to amaze me. For example, this is what I saw on the first night I arrived:

One of main objectives this season is to complete a field experiment that colleagues and I started out here in January of this year. This is no ordinary experiment though: it is a cross-cultural collaboration (and a half!), among French, British, Italian, German, and American (me) researchers. This all started when I received a research fellowship from the French Embassy of the U.S. to continue my field research on coral reefs in French Polynesia and to foster additional collaborations with my European colleagues. Though I was happy to receive the funding, I was unsure exactly how the collaboration would go–Would I find the right collaborators with similar research interests? Would we work well together? Would we be able to work well enough together to complete a rigorous field experiment?

The answers are: Yes. Yes. And almost yes (since the experiment is not quite complete yet!). 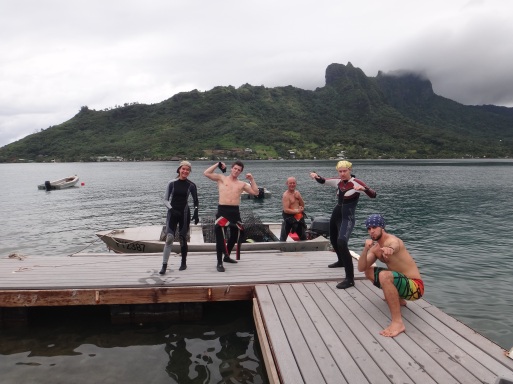 Some of the Euro-‘Merican crew, geared up and ready for some field work!

The pan-European research team and myself decided to ask the questions: What happens to a coral reef after a major disturbance,  and do these systems respond differently when they are exposed to different stressors associated with humans?

To answer these questions, we used small corals (collected from the field), and smooth terra cotta tiles, meant to resemble the barren rocks left behind in a recently-destroyed coral reef, to look at how small corals grow and survive and how settlement of new organisms may differ across different experimental treatments. For our experimental treatments, we tested the effects of three factors:

This design has resulted in an ambitious field experiment that will allow us to better understand each of these stressors (nutrient pollution, sedimentation, and fishing) and how each stressor effect may depend on the levels of the other stressors.

Putting this experiment into the field in January was a cultural experience for me. But this had more to do with working at CRIOBE, the French research station on the island, and less to do with communication (fortunately for me, all of my collaborators are English speakers!). CRIOBE is a very different station from Gump: for example, it is in Opunohu Bay (which is much less populated than Cook’s Bay, where Gump is located), there are resident scientists that oversee all of the scientific operations there, and (most notably for me) it is inland (as opposed to on the water) with limited boat availability. This last point really came into play when I went with my European counterparts to collect coral for our experiment. Bear in mind, January on the north shore of Moorea can be an intense time for weather–the swell is most often directly from the north, and storms are common. So when we were able to get a boat reserved, we knew we had to get out on the reef and get our work done as efficiently as possible, even if the weather was not ideal. Well, the weather was not ideal, and the day we went out to collect corals, the waters were raging in Opunohu Bay. At first, I thought nothing of this–I had gone into the field under much, much worse conditions, while working at Gump Station. What I hadn’t anticipated and what was revealed to me 5 minutes before we left the station to depart from the shore was that the boat we were taking was not moored out in the bay but instead needed to be launched from the shore (meaning directly into the waves crashing onto the beach). Also, the station truck we would use to do this did not have 4-wheel drive, so we needed to get the boat and trailer down the beach and into the rough waters manually (meaning by pulling/pushing it by hand). To spoil any anticipation of a major accident, I am happy to report that no one was seriously injured, but it was a pretty intense operation. After struggling to get the boat and trailer down the hill and into the water, I was then in charge of securing the boat (by simply holding onto the bow line) in chest-deep water to keep it from being thrown by the waves back onto the beach. This experience resembled a mosh pit at a Rage Against the Machine concert, and I took the hull of the boat to the chest on more than one occasion. Fortunately for me, the team got ready quickly, hurled the gear into the boat, jumped in, allowing me to jump in, and we were able to get the engine started and take off from the beach just before a wave ran us aground. This experience certainly gave me a higher appreciation for how tough the CRIOBE researchers needed to be to do field work in foul weather. Thankfully though, we got our coral collection done with no major issues, and we prepared an army of little corals to enter into our 6-month experiment.

My German collaborator, Silvan (right) and I, after a successful coral collection (despite the foul weather!). 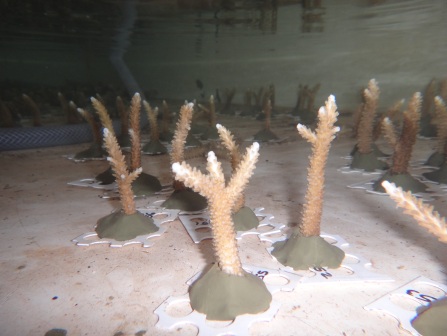 Some of our tiny army of Acropora pulcra coral colonies, just before they were deployed in our field experiment.

Once we pre-weighed the corals (so that we can weigh them at the end of the experiment to measure coral growth), we were ready to deploy the experiment. We used cinder blocks to anchor both our corals and our settlement tiles, and since we ended up with eight experimental treatments (2 levels of sedimentation [high and low], 2 levels of nutrient enrichment [high and low], and two levels of fish abundance [caged and uncaged]) and 9 replicates, we needed to haul 72 cinder blocks, as well as 36 cages into the field. 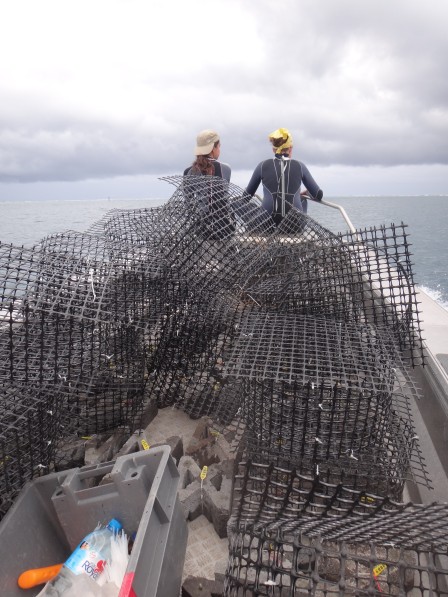 My collaborators, Anne (left), a French master’s student, and Suzie (right), a British professor, look to the horizon toward the site where we will deploy our experiment. At this point, as I am driving the boat it is just inching by, having been filled with countless cinder blocks and cages.

This was a very intense day, and we finished deploying the experiment just as the sun went down! Man, were we relieved.

From left to right: Anne, Suzie, Silvan and I share a moment of relief as we beat the odds and got the entire experiment out in one afternoon. Go team!

My European collaborators maintained the experiment until I returned here (Moorea) last month to take over. Soon, we will end the experiment and see what our treatments have done to the corals and tiles over the past 6 months. The anticipation reminds me of being a kid on Christmas Eve–but now data are now my presents :). I can’t wait to see what they tell us! More soon…